The Memphis International Airport fulfilled one RFQ and gave a hint into what development could come next at two recent public meetings about the airport’s master plan.

A Request for Qualifications (RFQ) was issued in September to find a Construction Manager At Risk (CMAR) to oversee the $700 million-$800 million continuation of its Terminal Modernization and Seismic Program (TMSP). 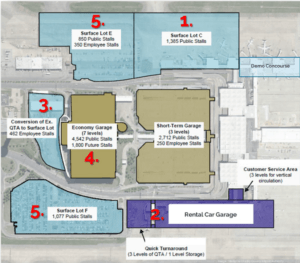 An application is currently out for funding for the terminal upgrade and should be back by next summer, Hay said.

Looking ahead, parking and even more development may be on the horizon, he said, but it all comes down to funding. Jacobsen | Daniels, the Michigan-based prime consultant on the airport’s master plan, has recommended a preferred plan for other landside development.

The MSCAA’s preferred plan calls for the “demolition of the existing A and/or C concourses” in order to add more landside development opportunities. It’s broken down into two phases.

The current rental car space on two floors of the Ground Transportation Center (GTC) would be converted into additional economy parking space. And the current quick turn around space immediately north of the GTC would be turned into a surface lot for employee parking.

One to two decades down the line there is a potential Phase 2 that includes the construction of a four-story hotel with about 180 rooms and a floor for meetings. But such a plan is very far off. The Phase 2 proposed map places the hotel on part of the current Concourse C. The hotel and a four-level garage could be built where a surface lot is going in as part of Phase 1.

It’s been a busy few years of construction for MEM, with the most recent delivery being the $245 million renovation of Concourse B. Currently underway is a $305 million consolidated de-icing facility.